Enjin provides blockchain support for gaming companies and over 40 different games and several individual NFT items. They enable developers to incorporate tradable virtual assets into their apps,  Bitcoin games, and other software. 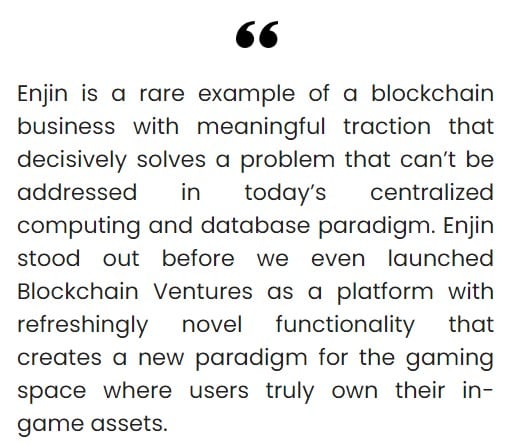 Reportedly, Enjin’s successful economic model was the magnetic force that influenced the investment decision of the Blockchain Ventures.

Enjin has been performing consistently well. In 2017 they raised $18.9 million during 2017 in investments by marketing its Ethereum-based indigenous tokens on their Initial Coin Offering (ICO). It has also acquired over 20 million user base.

Every asset created on the Enjin floor is an ERC-1155 token backed by the indigenous token of the ecosystem called ENJ.

To date, over 59 million ERC-1155 assets have been created via the Enjin Platform and comprise nearly 1% of the total supply of ENJ tokens being secured in digital assets, where it serves as a declaration of authenticity for the assets.

US BTC Mining Firm Core Scientific to List on NASDAQ

UTU and AMPnet to Work Jointly to Grow Trust Amongst Customers

The Future of Ethereum Gambling

What to Expect From Hedera Hashgraph in 2022 & Beyond?

Polkadot (DOT) Rallies but Gets Tackled by Resistance at $23

CryptoInvoke strives to report the latest news on the ever-evolving crypto and blockchain industry by adhering to its high journalistic standards and editorial policies. It has an expert team of reporters, news editors, photographers, and videographers who work dedicatedly to keep growing and improving its standards.